This tutorial is based on a new schematic. It is recommended to start a new (e.g. 'tuto_2') project, as explained in tutorial 1.1.

The case study is shown below. Within Capture 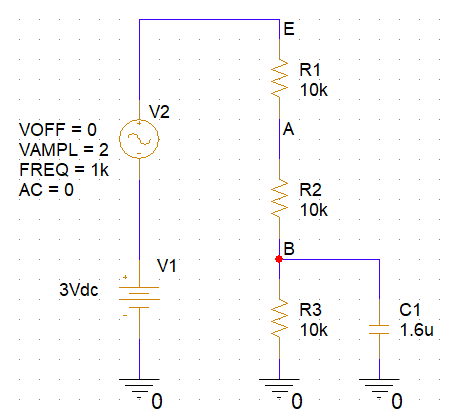 Save the design and then perform a bias point analysis. Annotate the schematic with simulation results and make sure you've got something similar to the capture below: 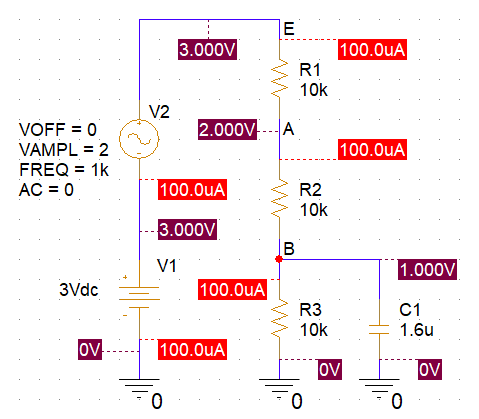 Let us discuss the results from the bias point analysis:

Transient simulation means that x-axis represents time. It basically produces an oscilloscope view of signals. The presence of a sine voltage function generator (i.e. something that varies along time) makes such simulation meaningful. Obviously, when all voltage and currents are constant, there's no point performing a transient simulation. 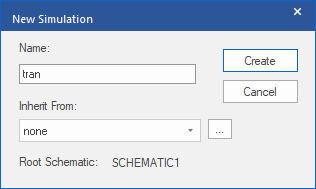 Then take a breath and think!

Transient simulations may produce large amount of data (disk space) if you want to calculate data for long. It is advised to restrict the simulated time to something reasonable. Here, we have a 1kHz sine wave. One signal period is 1ms. Simulation over 5 periods should be good enough to see something. So let's limit the final time to 5ms (TSTOP).

Next, you can limit the maximum step size if you want smooth simulation results. This is optional, and you may leave that field empty. The 5µs setting below guaranties that a minium of 1000 points (5m/5u) will be produced in the simulation result. Again, be careful... the smaller the maximum step size is, the more data you'll get onto your drive space.

Save the settings and launch

the transient simulation. When it is done, in the 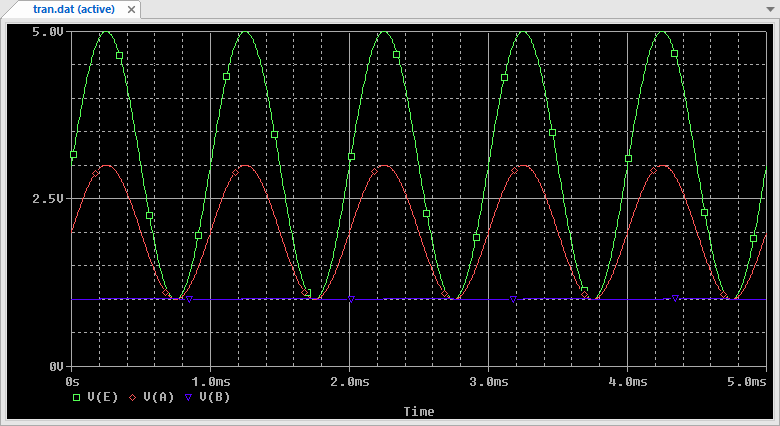 Some comments on the above results:

Frequency analysis is used to study the frequency response of the circuit. Up to now, we only considered two points:

Spice frequency analysis is called AC Analysis. It requires that you specify at least one AC source in your netlist. Usually, AC source is the voltage source associated with input signal. A common practice is to set the AC source magnitude to 1V. Doing so, output level may be considered as gain as well:

Even if this is beyond the scope of this tutorial, you may note that amplitude level in AC analysis is barely an issue because the simulated circuit is linearized (small-signal equivalent model) before the simulation is performed.

Change the AC value of V2 voltage source to 1V as shown below: 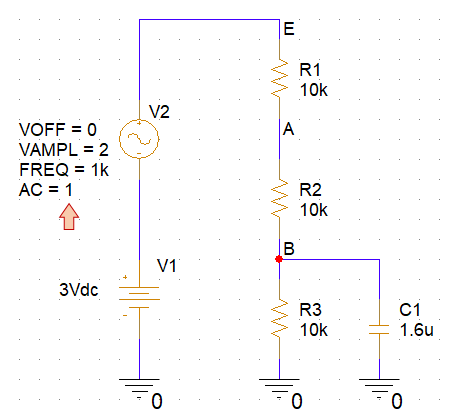 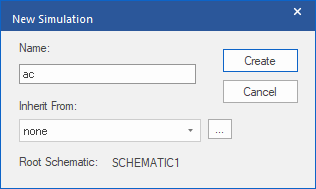 Then set the frequency range you want to cover. X-axis of a Bode diagram represent the frequency on a logarithmic scale. The below settings cover frequencies from 10mHz to 100kHz with 100 points per decade for smooth tracing:

Apply the above settings and then run

the AC analysis. When simulation is done, add the following traces

to the plot again: 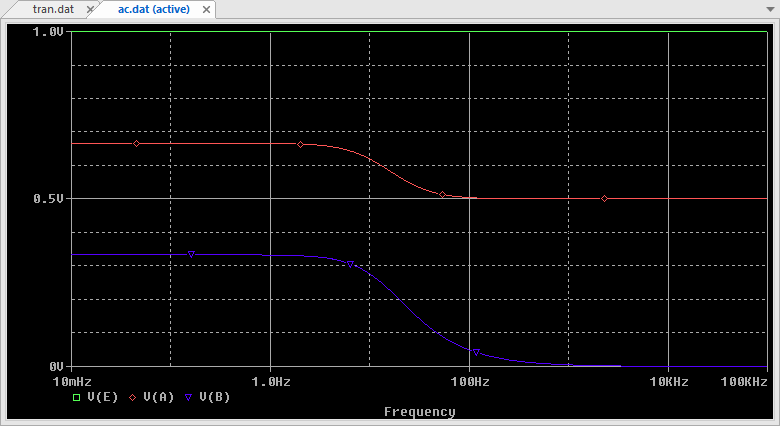 Let us analyze the results:

The figure below illustrate the two equivalent circuits we obtain at both very low and very high frequencies based on the capacitor impedance  approximations. 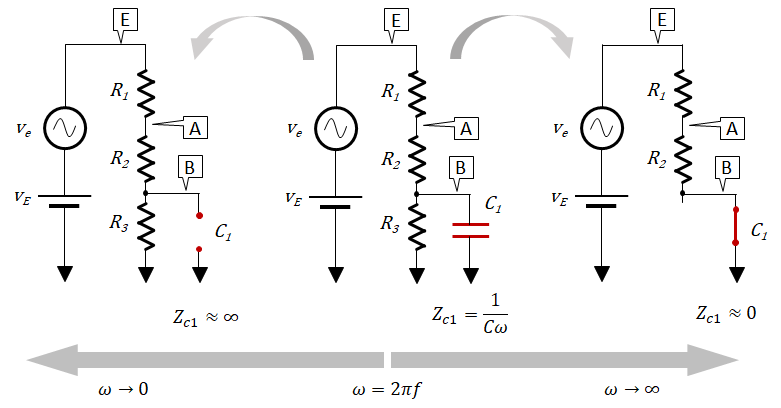 For now, delete all the traces from the plot and click the Add Trace button

again. Instead of plotting $V(E)$, $V(A)$ and $V(B)$ amplitude, let's plot gains in dB unit. Click the DB() operator and then the Output variable $V(E)$ to build expression as shown below: 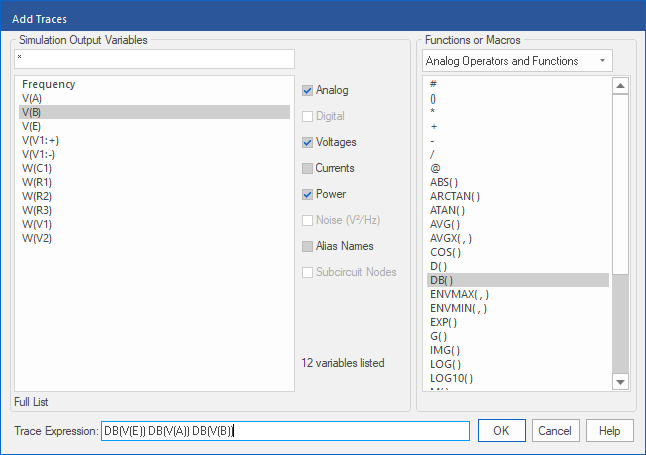 That's closer to a Bode diagram: 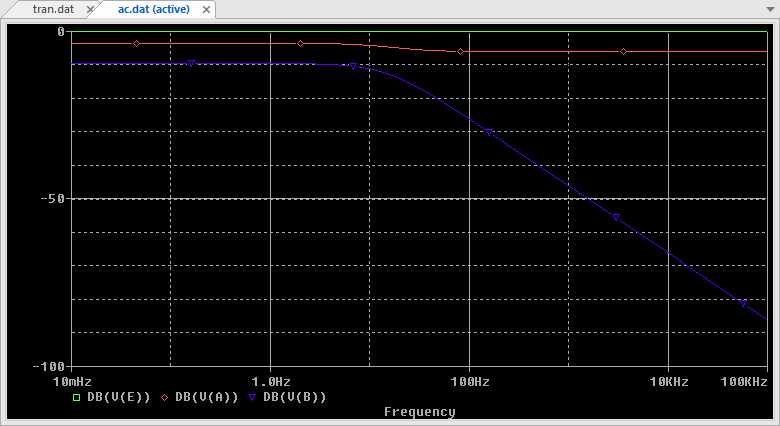 Let's now focus on $V(B)$. Again, clear all trace from the plot, then add a second plot to the window using main menu Plot→Add Plot to Window. Then add the following trace expression: 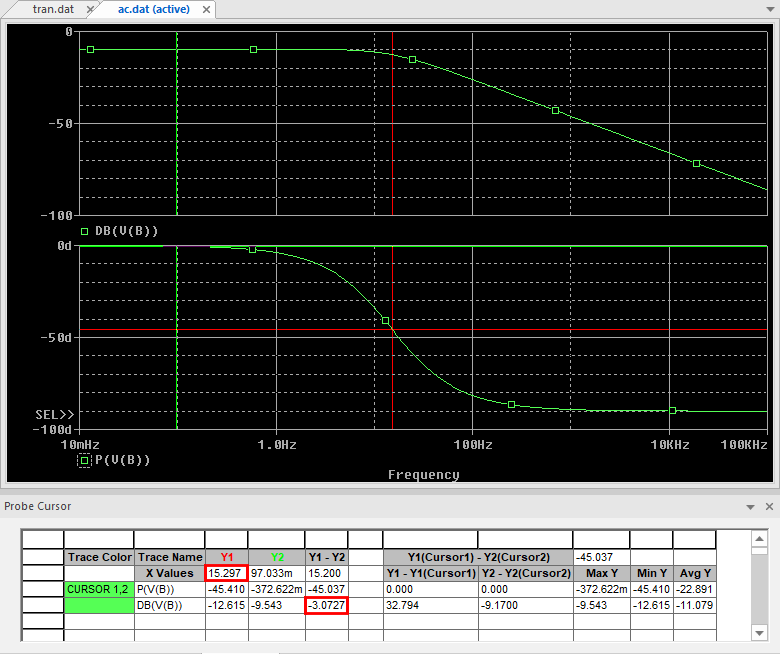 You can use cursors

as shown above to measure the -3dB cutoff frequency of $H_B(p)$ on the magnitude plot.