The phrase "clonewheel" is a play on words in reference to how the original Hammond produces sound through "tonewheels". The first generation of clonewheel organs used synthesizer voices, which were not able to accurately reproduce the Hammond sound. In the 1990s and 2000s, clonewheel organs began using digitally-sampled real Hammond sounds or digital signal processing emulation techniques, which were much better able to capture the nuances of the vintage Hammond sound.(https://en.wikipedia.org/wiki/Clonewheel_organ) 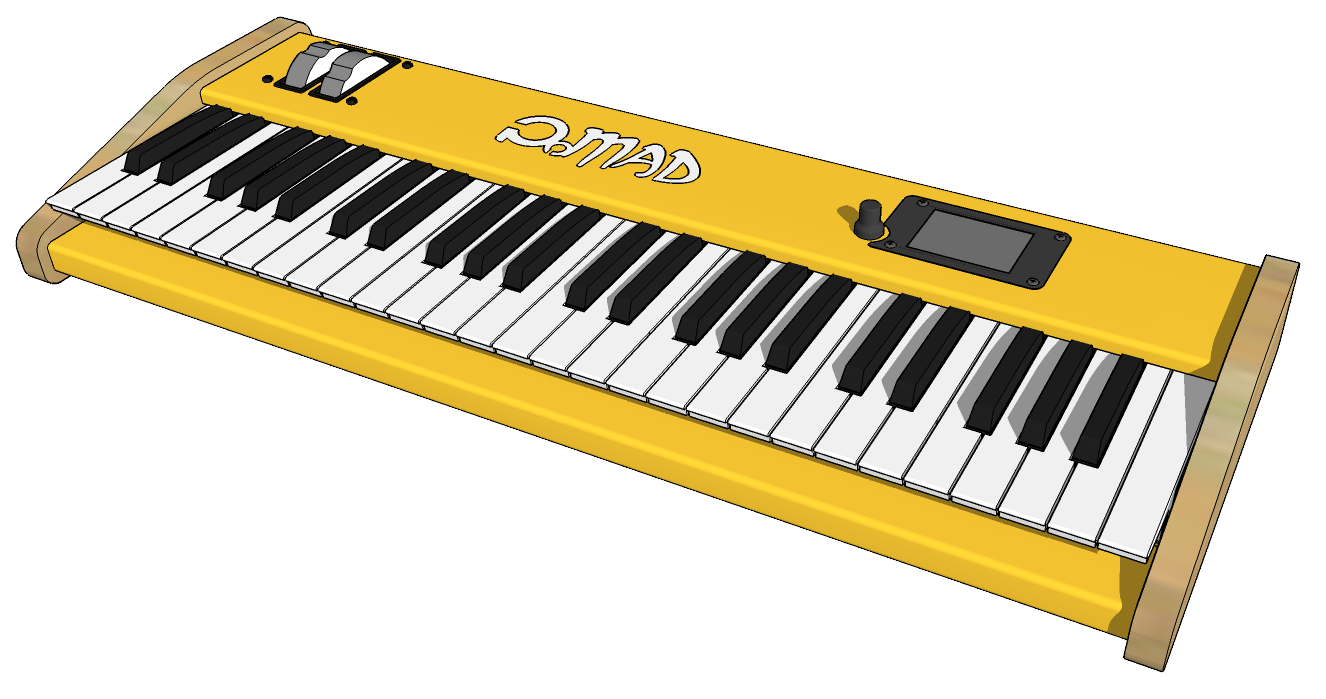 The organ is an assembly of few modules:

At this moment, there is no built-in Reverb effect, since this is something commonly found in mixing consoles. Although, I did consider adding an external Reverb unit such as one based on SPIN semiconductor FV-1 chip from Electro-Smith. Or a spring reverb, why not...

Also, the organ is not velocity sensitive. Yet, velocity is already available in the firmware data structure, so it shouldn't be hard to use this to modulate the envelope generator. I just didn't try...

Hey, and there's no sustain pedal. The jack plug is there, but not wired :-). Again, that shouldn't be too challenging to add this functionality to the envelope generator. I'm not that confident regarding the max polyphony... 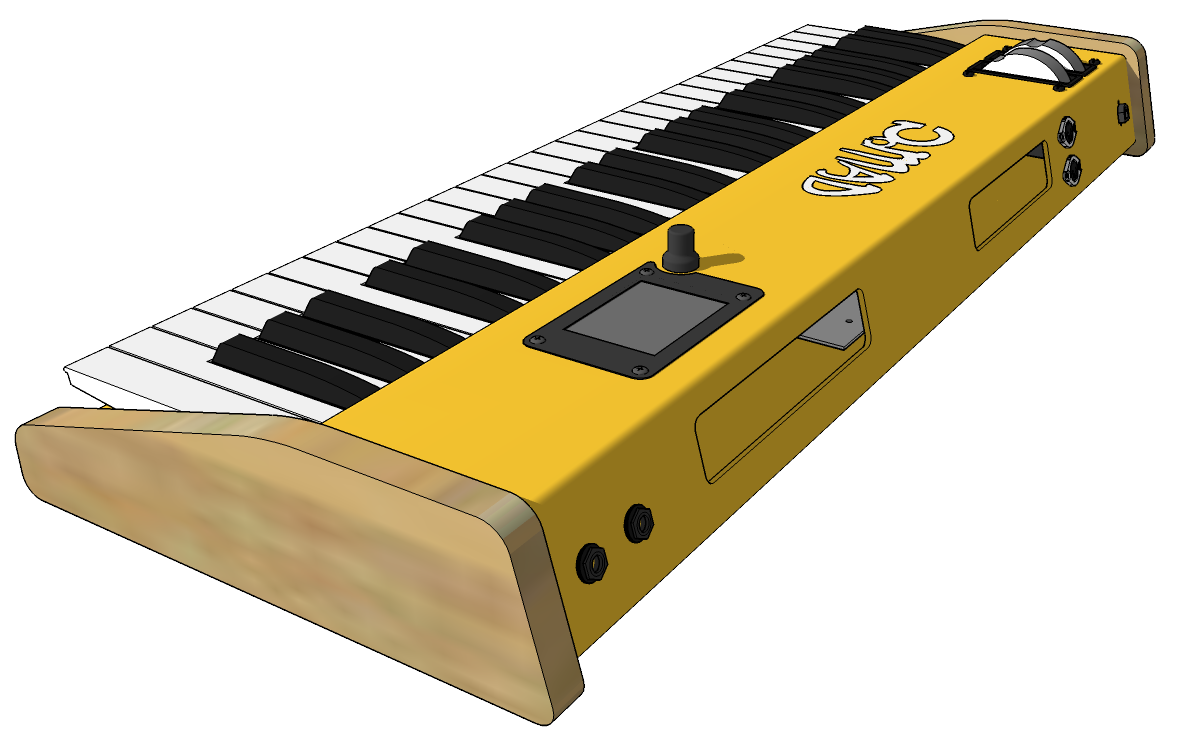 The sound of the organ is shaped by means of no less than 48 parameters:

These parameters are dialed using a single rotary encoder in association with a touch panel selection. User interface is made of 7 quite self explanatory panels:

For this prototype, the choice has been made to fabricate a complete organ keyboard. The keybed electronics is simply a passive matrix of contacts (a double matrix actually to measure velocity) that requires sequential row activation and column scanning to detect actions on keys. That's the purpose of the MIDI encoder board. Considering the price of the MIDI encoder added to the price of the keybed (not mentioning the fact that FATAR keybeds are not widely distributed), a much cheaper solution would have been to buy an entry-level master keyboard with MIDI output and connect it directly to the MIDI input of the audio shield. I would recommend this approach to anyone willing to test the organ synthesis first. Nevertheless, the FATAR TP/9S is nice under the fingers, so there's no regrets here... but the solution is expensive for a DIY project. Also, we could have developed our own MIDI encoder... but to be honest, there was no excitement here...

Given the important number of synthesis parameters we want to play with, the need of a simple method to transfer parameter values during runtime appears very early in the development process. There are many solutions including the use of GPIOs, potentiometers (which limits the number of channels), or issuing commands via the UART debug console. This last approach was preferred but instead of issuing console commands manually, a dedicated board has been designed around a touch screen display and a STM32F411 device. Having a separated module, with its own processor, for the single purpose of the user interface sounds a little bit overkill. But it is nice to think that the main CPU is entirely devoted to audio processing. Also, by keeping the architecture modular, parts may be reused in further projects.

The UI module "only" manages the touch panel display and sends a frame containing the 48 bytes (parameter values) every 200ms. Such time interval is enough for the reactiveness of the organ, and does not keep the receiving CPU too busy, but it would not permit real-time data such as modulation wheels to be transmitted this way. That's the reason why modulation wheels data are sent via MIDI CC message using the MIDI encoder board.

The UI module features its own SD card socket so that parameter sets can be saved and reloaded as presets. The reason for limiting the presets number to 100 is just that UI data field that displays the preset number was limited in size :-) A shame...

As its name suggests, the Nucleo H743ZI board features a high-end STM32H7 device with CPU running at 400MHz, with quite a lot of memory (2MB Fash, 1MB RAM), a plethora of peripherals including Serial Audio Interface (of special interest here), and DSP capability due to its embedded FPU.. That beast is widely available for a modest 25€ price everywhere. A reason for choosing high-end MCU was to explore the question: how much audio processing can we ask to a device that's still categorized into the microcontroller family, and therefore not competing with multi-core Cortex-A processors found on Raspberry Pi and the like, given that here, only low-level programming is involved without the load of an OS layer such as Linux or Android.

Yet, a specific shield devoted to audio applications has been designed to ease connections of external circuitry such as: 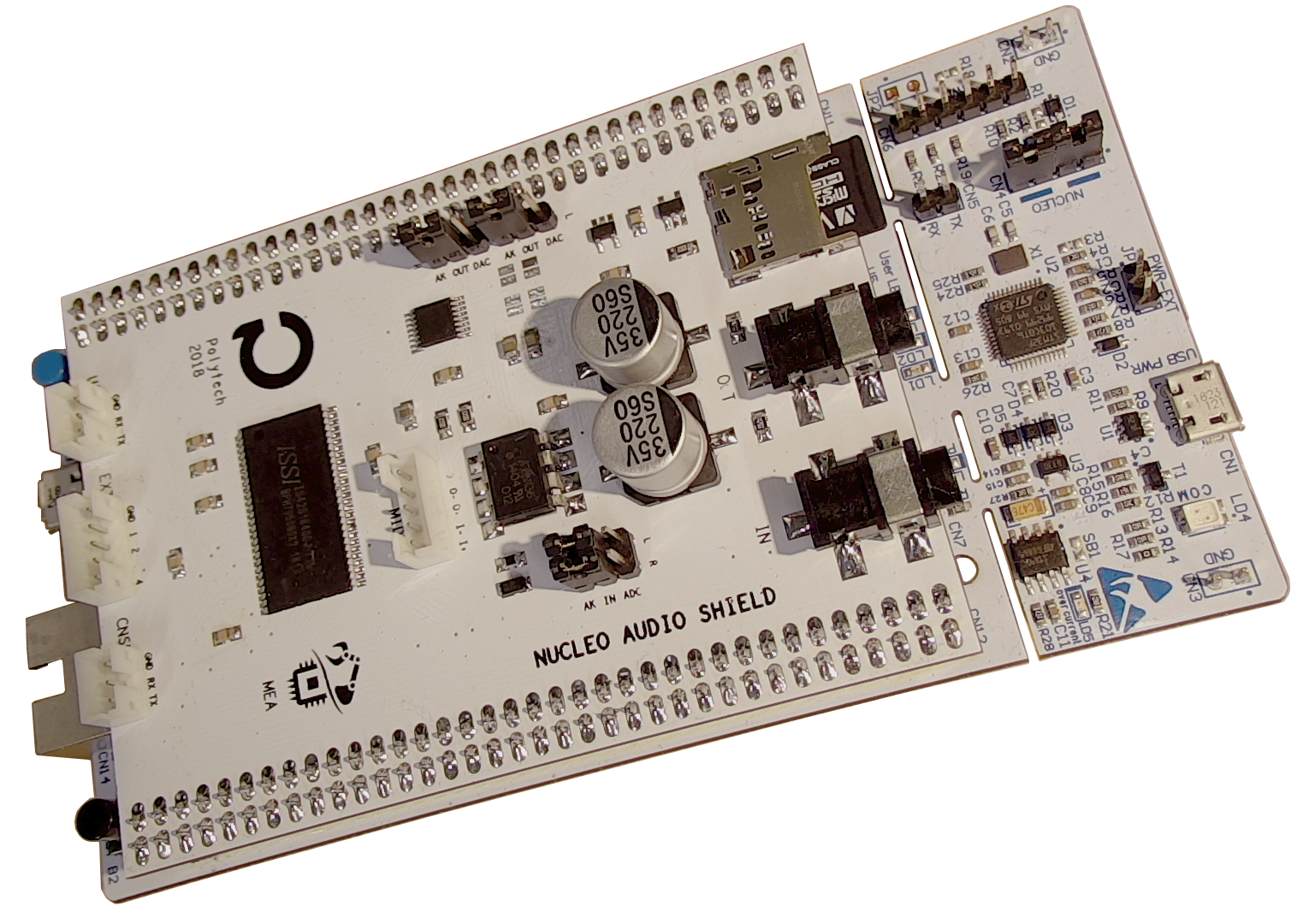 For those not in the mood of assembling such a shield, you may consider using commercially available breakout boards for audio converters (see Sparkfun), or even use the MCU embedded DACs that 'only' feature 12-bit resolution but might sound quite well. One limiting factor through, would be the availability of an external RAM for delay-based effects (delay, chorus, flanger, ...). Using the internal RAM is possible but will shorten the length of the delay line.

Below figure represents the hardware architecture of the actual prototype: 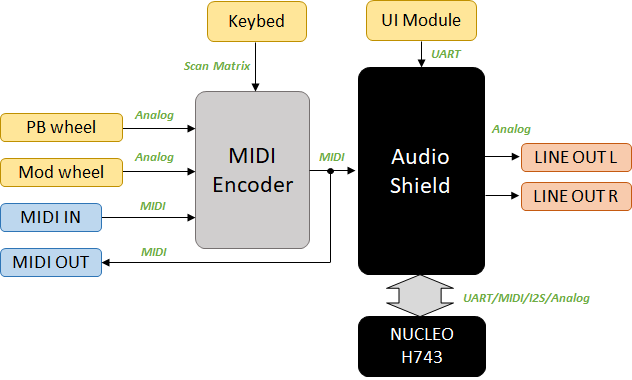 The picture below shows the whole mechanical assembly. What gives a professional look is undoubtedly the folded DIBOND® composite sheet, which was obtained using CNC to deep cut grooves where folding was desired. The subsequent folding turned out to be quite easy, without tools but bare hands... CNC was also involved for all the openings, the oak sides fabrication and other small parts. 3D printing was used for finishing wheel frames. Large back openings serve several purposes: LED visibility, access to programing and debug interfaces, ventilation, easy access to keybed connectors for assembly, and last but not least, access to CPUs reset buttons :-) Well that's how the MIDI 'panic' feature works here... 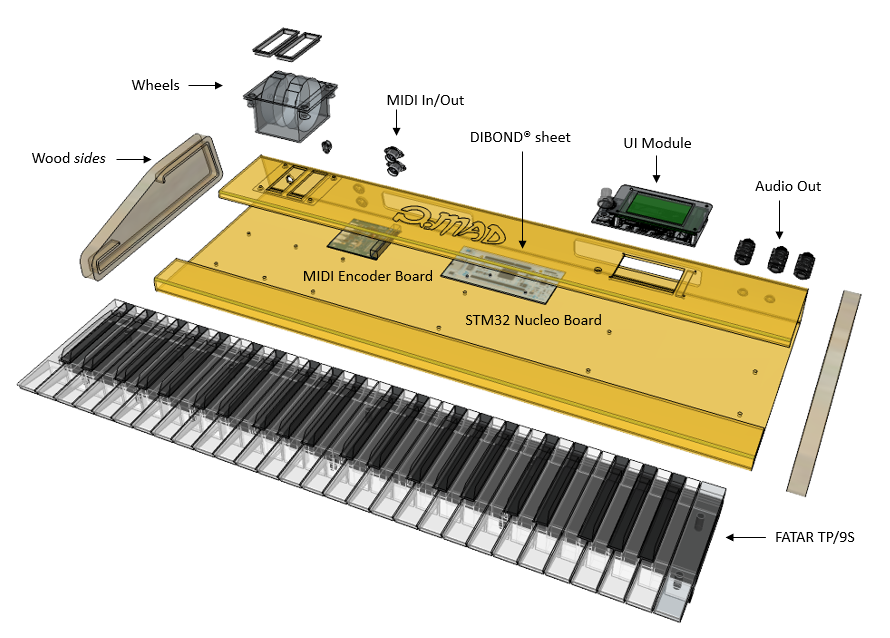 Below is a global view of the firmware architecture based on FreeRTOS and low-level (no HAL libraries) programming.

Processes are built upon : 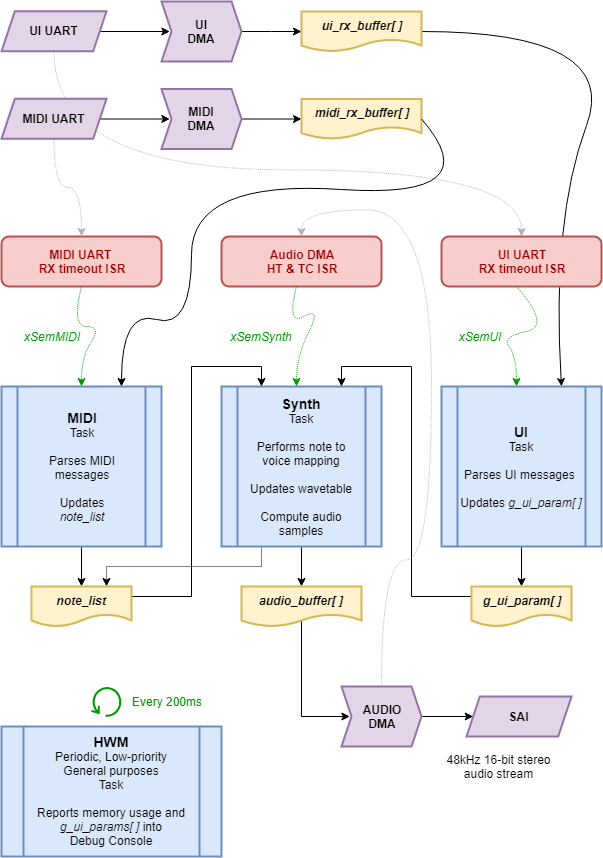 The chart below represents detailed execution of the synthesis task. You may notice that:

The key-to-voice mapping is maybe the toughest part because you need to take into account several casual situations, such as the limited number of voices or notes that play beyond the note-OFF event due to release time. I couldn't manage to have clean code here, although it seems to work. In its actual software version, the audio processing uses 70 to 80% of CPU time (16-voices playing with effects) under gcc -O1 compilation optimization settings. 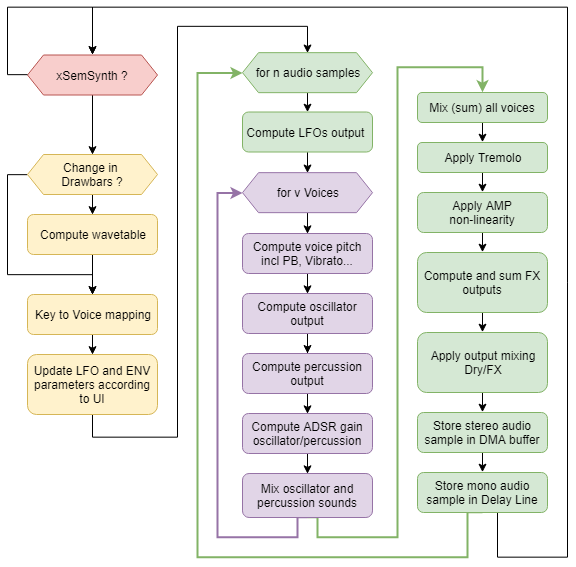 Here are two audio demos originally recorded with organs. The organ is hardware-controlled by MIDI sequences downloaded from www.midiworld.com. The audio output is fed back to the computer, recorded and mixed with virtual instruments for drums and bass tracks. There are no software EQ or FX plugins on the organ sound. What you hear is raw audio from STM32 synthesis. Master mix has been leveled before rendering.

Light my fire, by the Doors (MIDI track)

House of rising sun, by the Animals (MIDI track) 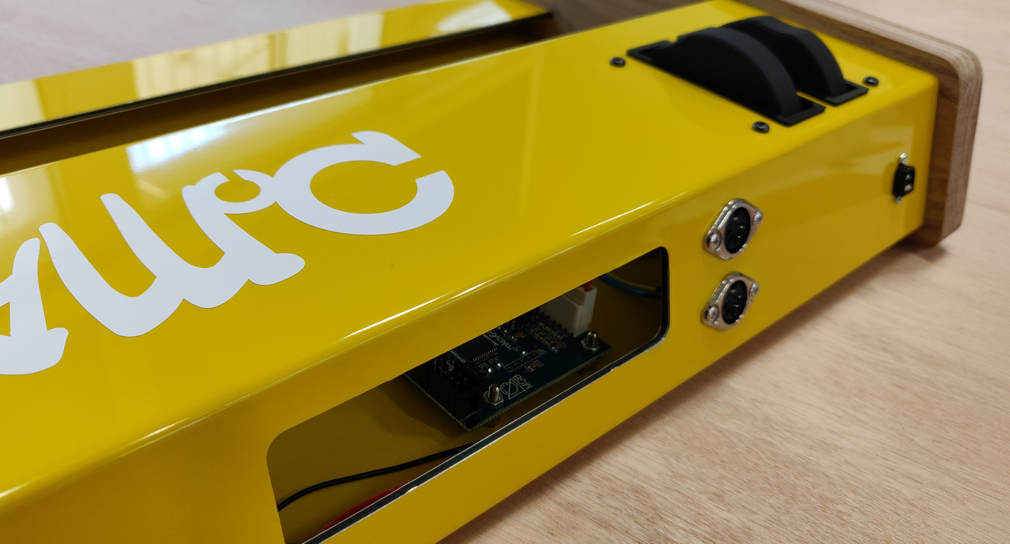 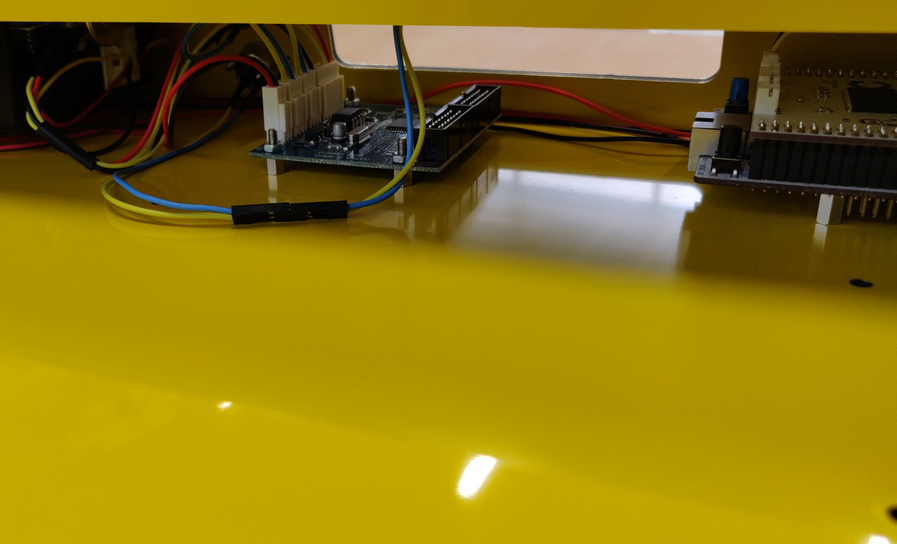 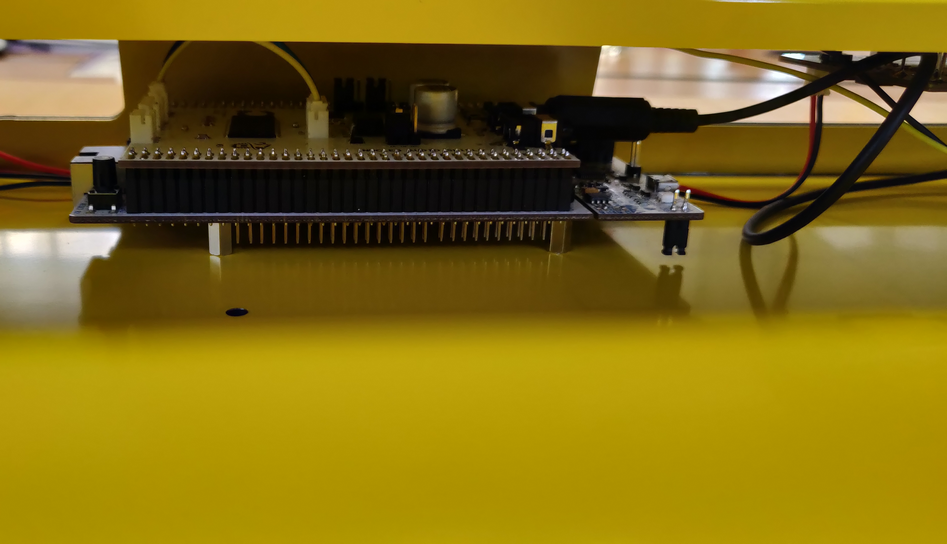 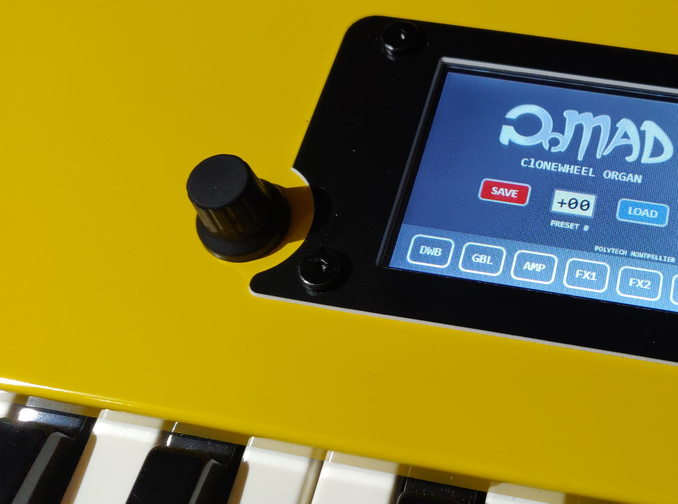 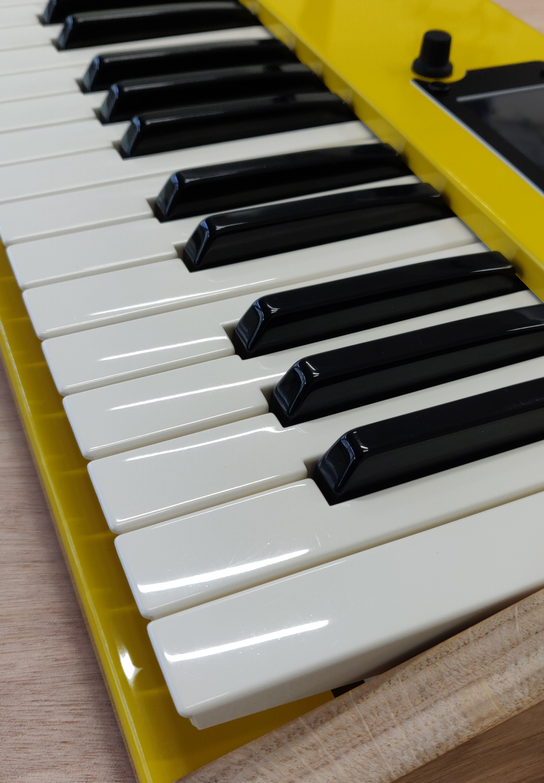